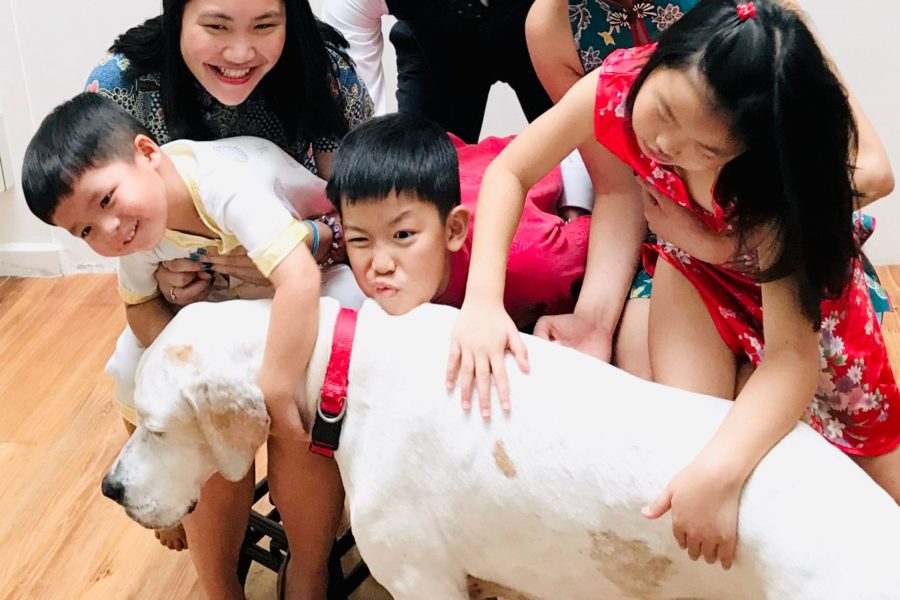 Grief is a gut-wrenching journey. As you know from yesterday’s Tribute To My Dog And Best Friend, Dylan died over the weekend. Here’s what our family went through over the past 24 hours.

Upon hearing the news that Dylan had died overnight, I rushed downstairs to see him. There I found one of my helpers wailing his name as she shook him, imploring him to wake up. I touched him and immediately knew from his cold body that he was beyond resuscitation. We tried to pull my helper away but she seemed adamant that she could reverse this disaster if only she cried loudly enough. And no wonder, for when I review photos now pouring in from friends, the unseen hand in the corner clutching Dylan’s leash firmly is hers.

When I told M5 that Dylan was dead, she yowled “WHAT!” in fury and dashed down to see him. After they carted his body away, she plonked herself on the sofa and lay in a fetal position, sobbing. Her foot brushed against a pillow. Inexplicably, she grabbed the offensive pillow and hurled it across the room. I was surprised by her reaction and asked her to tell us how she felt.

Without hesitation, she shouted, her voice cracking with emotion, “I wish the chickens had died instead. Why does it have to be Dylan?” We have a pair of beloved Silkie chickens whom Marion named Rosa & Bella. As she had raised them since they were chicks, they were her pride & joy. However, compared to the loss of Dylan, she would rather have traded their life for his.

In another corner of the room, our littlest, M6 could not eat, sleep or do anything without crying. Even walking upstairs, his little 4 year old legs would give way as he collapsed in a puddle of tears. He lay his head on M4’s lap and laid his grief bare for the world to see.

Breaking Down Our Grief, From Denial to Depression

I think, because Dylan was relatively well the day before, nobody expected him to die that night. As a result, everyone displayed a degree of disbelief. Nothing made sense; it was as if someone had yanked the world as we knew it from under our feet. I for one, felt rather numb. This was followed by some anger at missing subtle signs of his impending death. Like Marion, we repeatedly said it wasn’t fair that such a good dog, the best dog in fact, had left us. We looked accusingly at the other pets who dared to draw breath. It was irrational of course. But our grief was so loud in our heads that there was little room for reason.

In the following 24 hours, everyone cried, myself included, and I even fancied that the sky was crying when it poured all day. In fact, I took photographs of sky just outside our gate. It would’ve been the view Dylan saw every time he sit on his haunches in the doorway waiting for the kids to return from school. In other words, that would’ve been the patch of sky that looked straight at Dylan every day. As I gazed at the bruised, grey clouds and saw the rain slashing down, I imagined the depressed sky missed Dylan and was also crying out of grief.

Physically, I felt frightening symptoms. In fact I almost took myself to the Emergency Room because I had stabbing chest pains all day. This was associated with shortness of breath. I felt giddy, weak, clammy and sick to my stomach. One part of me said these were signs of cardiac insufficiency and I should get an ECG done. The other part of me recognised these as physical signs of grief and made a mental note to check if they persisted beyond a fortnight. After all, profound sadness that affects one’s ability to function may indeed be a sign of depression.

Eventually, we pulled through the initial crisis as a family. What helped was that the children were willing to confront death. Although some of them were a nervous about seeing Dylan dead on his bed, I suggested they try if only to see how peaceful he looked. They patted him on his paw and the bony top of his skull. Subsequently, just before his body was driven away, they gathered up their courage and unwrapped his body to give him one last hug. As we confronted and discussed death, the children moved through the stages of grief together.

Closing The Social Distance Between Us

Personally, I was grateful to have the support of my community. Some sent me photos they had taken with Dylan. Others revealed their own pain at losing pets and acknowledged my grief. Yet others sent flowers and cards, one containing a photograph of Dylan & me with the words “World’s Best Mom”.

Finally, many confided that they cried while reading my tribute to Dylan, and as I had cried while writing it, I felt our tears were connected. This was indeed a true shared experience through Dylan’s tale. Unfortunately, social distancing has robbed us of hugs and the warmth of being surrounded physically by friends in moments of grief. But this human connection through shared experience in words & tears has true meaning. It has helped me the most, to move through the final stage of grief: acceptance.

Our family will always love you even after the tears stop flowing. Thank you for being an important part of our lives. 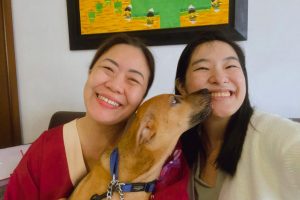 In the Mind of a Lay Rescuer

Responding to a Cardiac Arrest My first time performing CPR[...] 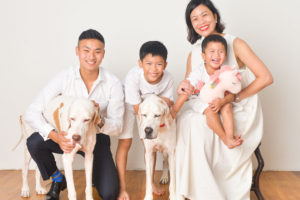 Tribute To My Dog And Best Friend

Dog Dylan Is Dead There is no twist to this[...]