Tales From Tux For Tails 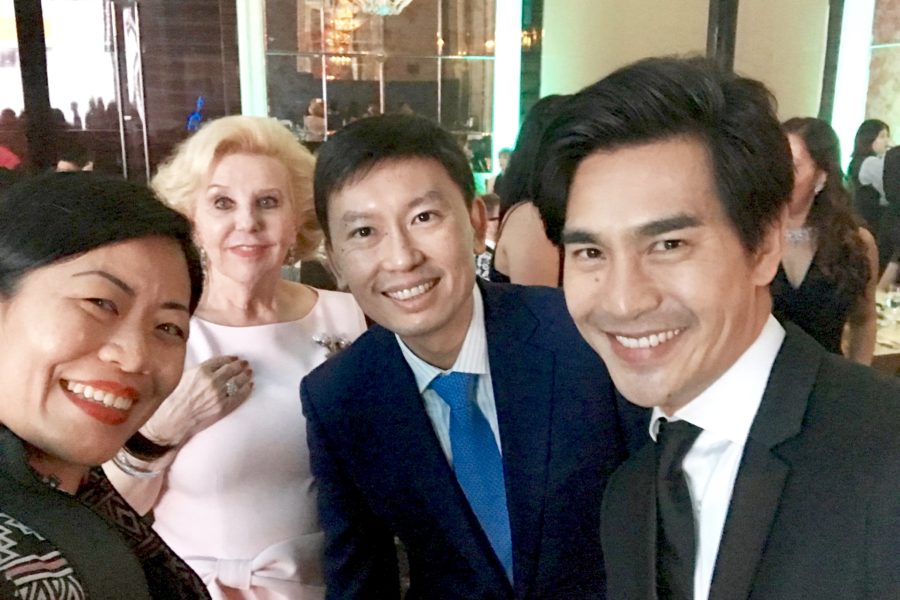 Tales From Tux For Tails

Tales Beyond Who Wore What at Tux For Tails: Fashion Ball 2018

Tux For Tails, a fund-raiser for the Society for the Prevention of Cruelty to Animals, is the last ball of the year. Imagine the St Regis ballroom filled with old friends reminiscing about the year gone by, sharing holiday plans and new year resolutions.

One of these friends I was glad to see was Trina. Trina was President of UN Women Singapore the same time that I was President of the Association of Women Doctors, Singapore. Consequently we spent a lot of time at meetings with the Singapore Council of Women’s Organisations, supporting each other’s causes. This year, she continues to break new ground by starting the Lin Foundation with her husband. Recently, she also unveiled World Food Future For Women.

Here we both are clad proudly in Singaporean designers; I am in a Lisa Von Tang long robe over a red Gin Lee Studio dress which I found recently at Keepers Singapore Designer Trunk Show. In fact, the day I bought my LVT robe some years ago, Yasminne Cheng helped me carry it into her car when she sent me home. Tonight, she was the emcee for the Tux For Tails gala and recognized the robe immediately.

As the theme for the Tux For Tails gala was Fashion Ball, the programme was nothing short of fabulous. Fittingly, the stage extended into a runway down the middle of the St Regis ballroom. All night, there were expertly executed fashion exhibitions, show-stopping singers and sometimes both combined. It was quite a treat to see on the runway, new generation designers as well as established ones like Thomas Wee, among other brands. Performers included Jessica & Keong, Hans Huang and the spectacular Victoria Wondersnatch.

However, the act that stole everyone’s hearts was not from any fashion-savvy human. It was not even live. A video made in honor of little puppy Toro, killed recently in an accident, was presented midway through the auction. After that there were very few dry eyes and many vigorous bids for items such as a Christmas tree filled with earrings. Although I had raised my hand thrice, I failed to secure what would’ve been my dream Christmas tree.

After I lost the Christmas tree, heritage jeweller, Dickson Yewn, from Hong Kong showed me a ring he had made specially for tonight’s silent auction. It featured the profile of a dog on one side, modeled after Toro. On the other side was a silhouette of a cat. I bought it instantly.

Why? I thought it was a meaningful memento of the evening, with money going to a cause I’m proud to support. I’m also a fan of Dickson, whom I had first met 12 years ago. Since then, he’s become much more prolific having designed for Michelle Obama. His latest designs are also socially responsible, making use of recycled materials. http://www.yewn.com/our-story.html As it turns out, my buddy, Joy, (below in blue) had also bought a Yewn ring the night before, at another ball. We laughed when we discovered we had both shopped for a good cause, from the same designer.

Mr Chee Hong Tat is the Senior Minister of State, Ministry of Trade and Industry, and Ministry of Education. When you’re a busy man, you practise economy of words. Mr Chee delivered an excellent speech of perfect length, giving enough information without delaying dinner too much. He congratulated the SPCA on their good work and highlighted efforts being done within his constituency. These included the trap-neuter-release programme and the community animal clinic.

When Mr Chee came round to meet and greet us at our table, we were overjoyed. In fact, Mr Chee & gala chairperson Gerti Iwatake obliged to take a selfie with me & Pierre Png, Singapore’s brightest acting star on the Hollywood scene. Right after our photograph, Pierre was pulled away eagerly for more photos by female fans. I solemnly asked the GOH what it was like to share the limelight with a Hollywood star. To which Mr Chee good-humoredly replied, he understood (the fans’ reactions) as it was after all, Pierre Png.

Truly, the entire night I was seated next to Crazy Rich Asians actor, he had to keep excusing himself for a long line of fans. Why, even the chef was thrilled to serve him. Well, he’s worked hard to get here; it’s wonderful to see him getting the appreciation he deserves. In fact, I suspect he deserves more from the industry.

Tale As Old As Time

The bond between humans & animals is as strong as its history is long. As Mr Chee said, we need to work towards a more compassionate society where animals are treated with kindness & respect. I don’t think it’s merely the decent thing to do. In fact I think it’s imperative. Tux For Tails Fashion Ball 2018 was about both style & substance. I was glad to attend it with like-minded friends who care about quality healthcare for creatures other than ourselves.