Going Green In May With Emeralds 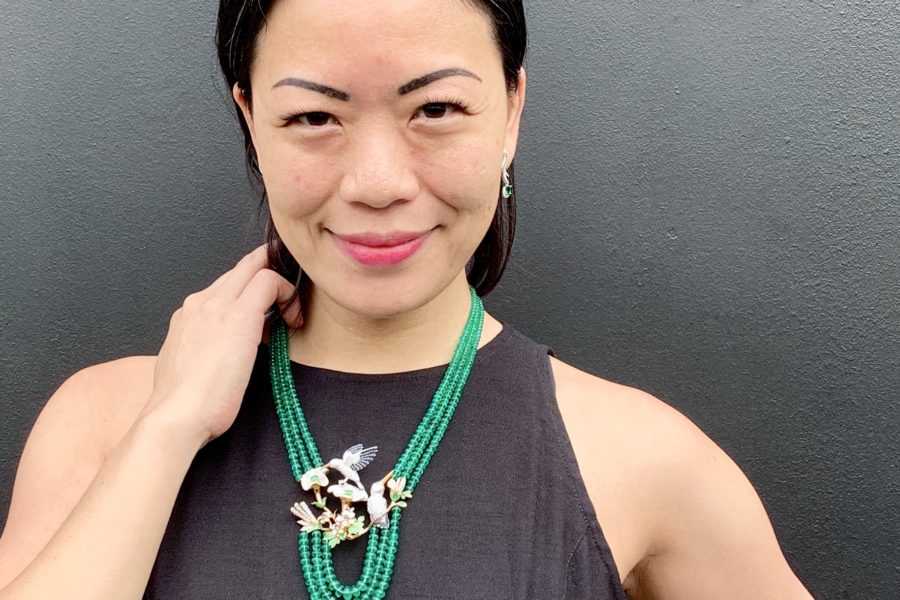 Going Green In May With Emeralds

There’s something alluring about emeralds. I remember admiring some from Karen Suen at Jeweluxe And The Fellowship Of The Ring last year. Recently, while Celebrating Shiny Happy Adventures Of Momlife a suite of emeralds from Flower Diamond caught my eye.

As it turns out, they are the birthstone of May babies like our darling M3. In fact, she turns 17 today but I won’t see her as she’s miles away at school. Since she’s currently studying Maths, Further Maths, Greek & Latin, I’ll investigate emeralds from these aspects. Let’s see what we can come up with.

Emeralds are from the Beryl family with a specific gravity of 2.72. This means generally, a one carat emerald will look bigger than a one carat diamond, whose SG is 3.52.

Furthermore, compared to diamonds which score a hard 10 on the Mohs scale, emeralds are considered soft, scoring 7.5. Practically speaking, this means you have to be careful with emeralds. Dropping them on say, a marble floor, might result in shatter.

I consulted the Gemological Institute of America for some interesting figures. According to https://www.gia.edu/emerald, the oldest emeralds date back 2.97 billion years and originate from South Africa. That’s a mighty long time ago. I googled to find out what on earth (literally) was happening back then. It seems isotope geochemists discovered layers in South Africa’s Pongola Basin which have evidence of oxygen production by bacteria at that time. (See: https://www.sciencedaily.com/releases/2018/01/180118084202.htm) How about that? Emeralds & an oxygen oasis at the beginning the life on earth.

The first known emerald mines were in Egypt, way back in 330 BC. Queen Cleopatra herself was passionate about emeralds. In fact, Elizabeth Taylor who famously played Cleopatra, was a fan too. When she died, there was a phenomenal auction for her jewellery. Notably her emerald pendant sold for US$280,000 per carat, or a total of US$6.578 million.

Astronomical sums also exchanged hands for the historical Rockefellar Emerald, selling at US$5.5 million, or US$305,000 per carat.

Even before I knew about gems, I had read, in kindergarten, about the Emerald City in the Wizard of Oz. Everything was green. In fact, the origin of emeralds comes from the ancient Greek word for green, “smaragdus”.

Emeralds occur as a cyclosilicate with trace amounts of chromium (or vanadium). It is this chromium that causes the primary green hue. Common secondary hues are yellow and blue. Notably, only gems that are medium to dark in tone are considered emeralds while the light-toned gems are merely green beryl. A fine emerald is one which has a vivid hue and is saturated.

Just last weekend, local jeweller, Calla Lily, presented a trayful of loose emeralds of various colours. They looked absolutely yummy, as were the green-hued kuehs generously proffered. It looked a bit like emerald city in that cosy Tiong Bahru atelier!

In Latin America, the Incas used emeralds in jewellery and ceremonies for centuries before being plundered by 16th century Spaniards. This area is now known as Colombia where most emeralds, and arguably, the finest emeralds, are mined.

I read that Colombian emeralds are the only ones found in sedimentary host rock. Tectonic movements that created the Andes Mountains forced the beryllium, chromium and vanadium into liquid and gaseous states. In these states they found their way into cracks in sedimentary medium where they cooled and crystallised. Subsequently the iron deposits washed out, leaving pure green precious stones.

Hence, inclusions are common and not considered flaws. Instead they are part of the natural beauty of emeralds, like a garden. Typically one can find three-phase inclusions of gas bubbles, liquid and crystal in Colombian emeralds. (However, these were recently found in other locations too.) Of course, the clearest Colombian emeralds are considered most valuable. Regardless, I must confess, I love mine precisely for its inclusions which are like a unique snowflake. 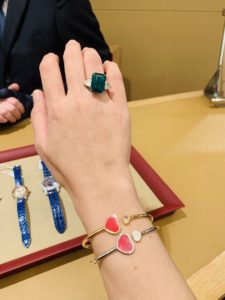 I wear my own Colombian emerald ring to Chopard’s Mother’s Day party and admire their Happy Hearts bangles.

Historically, the important mines in Colombia are Muzo & Chivor. However, the terms now refer to typical colours. (This is much like how Paraibas may not be from Brazil but refer to a certain colour when Obsessing Over Tourmalines This October ) Well, Muzo suggests a warm, grassy, yellowish green stone while Chivor suggests a deeper green colour.

Outside of Colombia, Zambian mines have produced emeralds since 1976. These have a bluish hue due to iron content. They also tend to have greater clarity, with fewer inclusions. I had the pleasure of trying on various Zambian emeralds at a recent luncheon where Simone Jewels Celebrates Hidden Gems.

So there we have it. M3, I know you’re not as nerdy about gemstones as I am; few people are. But I hope that introducing your birthstone through subjects you know will help you understand your birthstone.

In summary, it’s one of the four precious stones in the world, alongside diamonds, sapphires & rubies, and very valuable. It is uniquely beautiful, with inclusions considered fascinating rather than a flaw. Although gemstones are generally tough, emeralds are relatively soft, so one must treat them carefully with love.

Happy birthday, to our precious and unique gem. You are cherished for all of your quirks. Thank you for giving me a chance to love you.